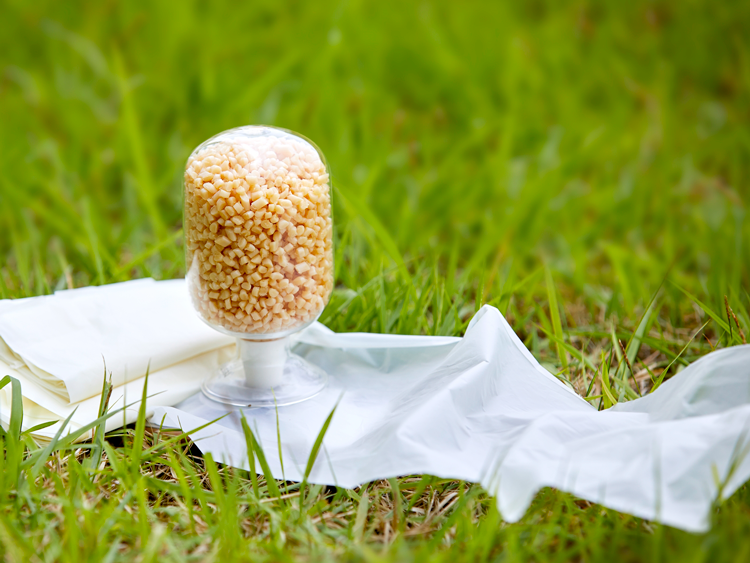 composting facilities, etc. Biomass-based plastics, on the other hand, are made from natural ingredients such as corn or sugarcane.

while remedying the shortcomings of oil-derived biodegradable plastics. Isosorbide is a biomaterial produced through chemical processing of

starch extracted from plants such as corn. Isosorbide is a substitute for preexisting chemical materials used to produce plastics, paints, and adhesives.

This material is more carbon neutral and degrades faster in soil than oil-derived materials. In addition, it is more durable and tougher than

oil-derived materials. Thus, it can be made into thinner films, which consequently reduces plastic consumption. Samyang’s isosorbide-based

Not only did Samyang develop the world’s first isosorbide-based biodegradable plastics, but they also succeeded in developing compounds optimized

for film processing based on the convergence of food and chemical technologies. Thermoplastic starch should be compounded to process

biodegradable plastics into films. As the content of thermoplastic starch which is a plant-derived material increases, it is more eco-friendly,

but difficult to process into films due to low tensile strength.

Samyang is Korea’s only company that runs both starch and chemical compound business. After two years of technology convergence research,

meet EU’s regulatory standard for biodegradable plastics and are able to enter the EU market.

An official at Samyang said, “We succeeded in developing isosorbide based on our technology convergence. In addition, we are continuously

working on developing eco-friendly plastics based on this technology. We will put forth the efforts to reduce carbon emissions by expanding

the use of biomass-based isosorbide.”

In 2014, Samyang secured the commercial isosorbide production technology for the first time in Korea and the second in the world. Samyang is

building an isosorbide factory with an annual production capacity of approximately 10,000 tons at the Samyang Innochem Corporation Plant,

with the goal of completing the construction in the second half of this year. In addition, it is developing a variety of applicable technologies and

products in preparation for the completion of the isosorbide factory. In April 2020, Samyang was selected as the leader of the Biomass-Based

Biodegradable Polycarbonate (PC) and Parts Development Project supervised by the Ministry of Trade, Industry and Energy.